[image removed]
Two recent articles highlight this activity. The first, published by Greater Binghamton NY pressconnects.com, describes a pipeline that would run through Forest Lake, Susquehanna County, PA and Great Bend PA into Broome County, NY connecting to the Millennium Pipeline in Windsor, NY. The proposed pipeline would require construction of three compressor stations in Windsor NY (see the article’s correction). The second story published in the Wayne Independent announces that Penn State Cooperative Extension will host a workshop titled “Understanding Natural Gas Pipelines and Rights of Way” in Honesdale, PA on Wednesday, September 8 at the Wayne County Park Street Complex. This meeting will start at 6:30 pm and will include representatives from the Cooperative Extension, Tennessee Gas Pipeline, the Federal Energy Regulatory Commission, Wayne Conservation District and the law firm of Tressler-Saunders LLC, Scranton. Topics of discussion of this meeting will be the Tennessee Gas Pipeline looping project, federal pipeline regulations and understanding right of way agreements.As the shale gas industry continues to develop and expand, and in some areas to expand to produce byproduct gases and organic compounds, pipelines are needed to connect these new producing areas with major supply lines. Byproduct gases and other useful organic chemicals will also need to be more efficiently transported to petrochemical facilities, and/or new petrochemical facilities will need to be built. This also means that new compressor plants will need to be established.

Methane gas pipelines and pipelines carrying other organic gases and vapors, their site requirements, and proximity to population centers have important public health implications for both occupational and environmental health and community and behavioral health and have been the subject of public health research in the past (Binder S, 1989). Also, gas pipelines can have significant impacts on forests, fragmentation of habitat and endangered and threatened species and severe ramifications for wildlife systems in the event of catastrophic releases (Dey PK, 2002). Pipeline explosions and fires and acute inhalation of gases, which can have immediately dangerous to life and health consequences, occur at varying frequencies throughout the United States and in fact around the world. A branch of public health termed “emergency preparedness” is dedicated to the prevention of accidental or intentional incidents resulting in infrastructure failures and includes nuclear power plants, water treatment systems as well as oil and gas pipelines. More info: see Centers for Disease Control and Prevention’s Preparedness for All Hazards and the University of Pittsburgh’s Center for Public Health Preparedness (UPCPHP) that trains public health professionals, including professionals in related organizations, to respond to public health threats and emergencies. This project is funded through the Center for Public Health Practice by the Centers for Disease Control and Prevention cooperative agreement number U90/CCU324238-05.

In the United States the Department of Transportation’s (DOT) Pipeline and Hazardous Material Safety Administration (PHMSA), acting through the Office of Pipeline Safety (OPS), administers a regulatory program to assure the safe transportation of natural gas, petroleum, and other hazardous materials by pipeline. OPS develops regulations and other approaches to risk management to assure safety in design, construction, testing, operation, maintenance, and emergency response of pipeline facilities. PHMSA is committed to a data-driven approach to developing and refining pipeline safety programs.

On PHMSA’s stakeholder communication website, there are extensive pipeline incident and mileage reports. These reports present information and trend analyses for pipeline incidents over the past 20 years. Categories of important data and reports are grouped by:

In the last category of all reported incidents, the reports provided are generated from numerous data sources maintained by PHMSA and span decades of collection, evolving methods of oversight and multiple reporting formats. To generate these reports, PHMSA has standardized the data over various file formats, normalized incident costs over time to a common basis year- 2009 dollars, and standardized incident cause categories – all with the goal of producing a coherent and meaningful picture of National and State-specific trends in pipeline incidents. If you prefer to produce your own analysis, the raw data used in these reports are available to the public.

On this site PHMSA offers access to significant incident data. This is a treasure trove of important data that are all available to the public. In addition to 2010 data to present, there are data on flagged and significant incidents from 2006 to 2/17/2010. Below is the gateway to each year’s incident reports:

These files are a flagged version of all operator reported incident files that can be accessed from the PHMSA FOIA On-Line Library (a Freedom of Information Act library). The above flagged version of files differs from the FOIA on line library in they have been flagged to indicate incident significance, flagged to indicate fire-first Gas Distribution incidents, and include indexed costs in addition to raw (nominal) costs.

The 2010-present PHMSA flagged dataset reports 38 total incidents across the country. Thirty Three (33) or about 87% of these incidents were reported as significant incidents. Reported in this dataset is an explosion and fire at a major natural gas pipeline; it occurred June 7, 2010 in Johnson County, Texas near Cleburne. The blast and fire killed one worker and injured seven others. It was caused by utility workers digging holes for utility poles. There was only one home within ½ mile of the explosion and fire, and it was not affected. CHEC recently converted some of this data from excel spreadsheets to comma separated values so that it could be displayed and visualized on FracTracker’s data tool:

[image removed]
A whitepaper produced by principle investigator Mark Stephens of C-FER Technologies under contract with the Gas Research Institute presents an approach to sizing ground area potentially affected by the failure of high pressure natural gas pipelines (Stephens M, 2000). It states that rupture of a high pressure natural gas pipeline can produce threats to both people and property in the area where the failure occurs. In this whitepaper an equation was developed relating both the diameter and operating pressure of a pipeline to the area that is affected in the event of a real world worst case failure incident. The model on which the hazard area equation is based depends on three factors:

The equation given in the manuscript is as follows:

This whitepaper used actual explosions and fires to demonstrate the usefulness of their model. These incidents are excerpted from the manuscript to show the types of incidents possible and the damage and fatalities that can result. 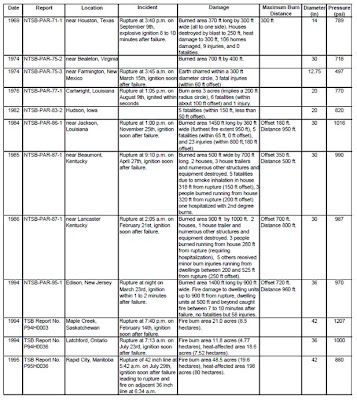 Mike Benard has written a blog post on some of the unanswered questions surrounding pipelines, as well as lessons learned from other shale regions. Read more.
https://www.fractracker.org/a5ej20sjfwe/wp-content/uploads/2021/04/2021-FracTracker-logo-horizontal.png 0 0 Guest Author https://www.fractracker.org/a5ej20sjfwe/wp-content/uploads/2021/04/2021-FracTracker-logo-horizontal.png Guest Author2010-08-23 10:16:002020-07-21 10:36:41Methane and Other Types of Pipelines Being Proposed as a Result of Shale Gas Expansions
Scroll to top