I am often asked how many Marcellus Shale wells or permits there are in Pennsylvania at the moment. The answers to these queries are growing all the time, and while I try to keep these datasets current on our DataTool to allow for mapping, the quickest way to find these answers is to look on the Well Permit Workload Report at the DEP website.  The workload report is updated weekly, and has a variety of information about drilling and inspection activities over a variety of time frames.  Many of the basic figures that people want to know about the industry in Pennsylvania are readily available:

Another feature of the workload report is that it breaks down the status of Marcellus Shale permit applications from 2005 through the present. 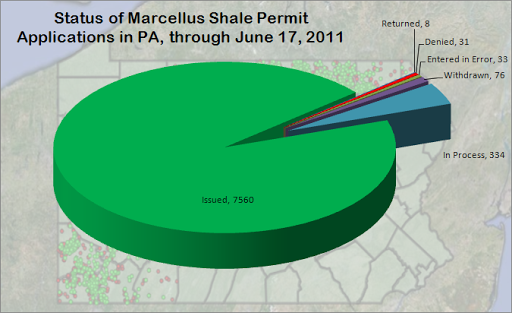 Status of Marcellus Shale Applications in Pennsylvania, as of June 17, 2011

How selective is the process? Of the permit applications received so far, 94 percent have been approved, and four percent are still in the process of being evaluated. Only 31 applications (0.4 percent) were actually denied.

Between the Marcellus Shale and other formations, the DEP has issued over 16 permits for new wells every calendar day so far in 2011.

2011 year to date inspection and violation data for Pennsylvania

So far this year, non Marcellus Shale wells are slightly more likely to be issued a violation upon inspection than their Marcellus Shale counterparts. This is actually a fairly dramatic change from 2010 data, which is summarized below:

2010 inspection and violation data for Pennsylvania