Recently, the Pennsylvania Department of Environmental Protection Bureau of Oil and Gas Management has added historical oil and gas production and waste data for non Marcellus Shale wells. This data is now available as far back as 2000.

I’ve made a couple of charts to illustrate production values for these wells over time. 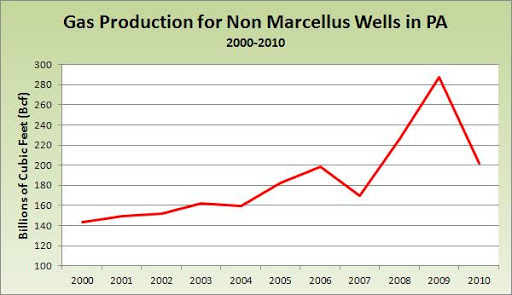 Gas production per year, in billions of cubic feet (Bcf) Oil production per year, in millions of barrels

In addition to oil and gas, about 195,000 barrels of condensate was reported for 2010, representing about eight percent of non Marcellus oil production in Pennsylvania. No condensate production was reported between 2000 and 2009.  Condensate is considered to be similar to light sweet crude oil, both in terms of composition and value.

While annual oil and gas production seem somewhat erratic, the overall trend for each shows an increase in production over time.

Look for more in depth summaries and analysis of the production and waste data in the near future.