Oil and gas production and waste reports for 2011 are now available for download at the PADEP Office of Oil and Gas Management website, and the Marcellus shale portion of that is now available on FracTracker’s DataTool as well:

Marcellus Shale production from July to December 2011. Click the gray compass rose and double carat to hide those fields.

The third dataset contains the production and waste data aggregated by county, as in the following chart: 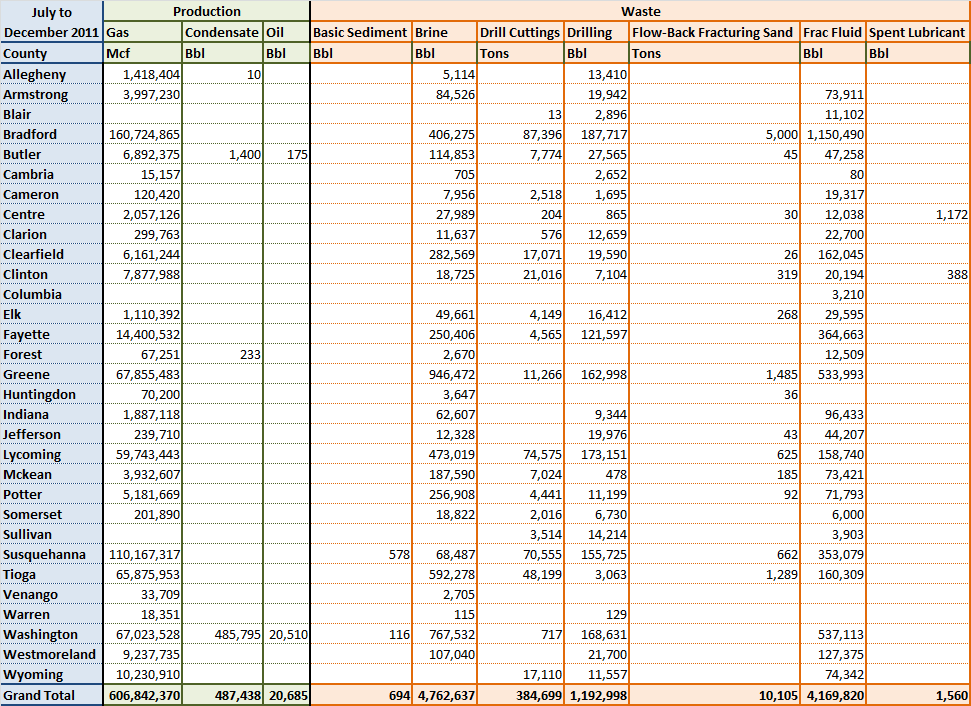 Keep in mind that these totals are self-reported by drilling operators to the DEP.  Marcellus Shale waste and production data are released every six months, while non-Marcellus Shale data is released annually.  The following non Marcellus shale datasets are also available:

So Pennsylvania joins the trillion cubic foot (Tcf) club with 1.2 Tcf of natural gas produced, more than doubling the 2010 dry production value, according to the US Energy Information Administration (EIA).  The EIA does not yet have state values for 2011 posted, but Pennsylvania’s 2011 total would have ranked eighth in 2010 behind  Texas (6.3 Tcf); Federal Offshore Gulf of Mexico (2.2 Tcf); Wyoming (2.2 Tcf); Louisiana (2.1 Tcf); Oklahoma (1.7 Tcf); Colorado (1.5 Tcf) and New Mexico (1.2 Tcf) for dry gas production.

Stay tuned to FracTracker for more analyses of these reports in the coming days and weeks.