In the first half of 2012, gas production from unconventional sources such as the Marcellus Shale was reported in 30 different counties in Pennsylvania, according to data downloaded from the Pennsylvania Department of Environmental Protection (PADEP) website on September 10, 2012. Of these, 19 counties had aggregated totals of at least one billion cubic feet (Bcf), lead by Bradford (235 Bcf); Susquehanna (189 Bcf); Lycoming (97 Bcf); Tioga (89 Bcf); Washington (79 Bcf); and Greene (74 Bcf). Here are the proportions of those 19 counties presented graphically: 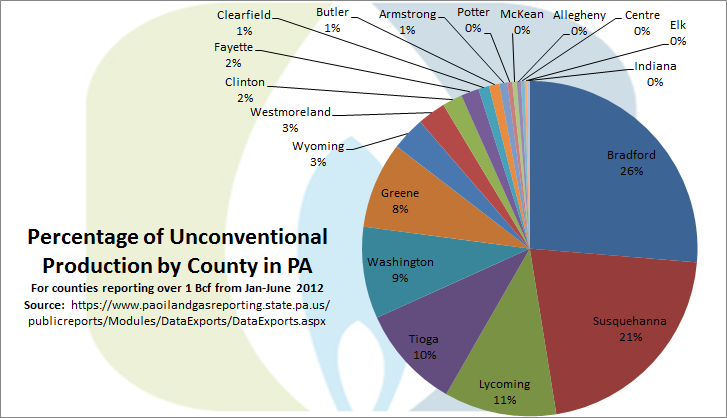 We can also view the data spatially. To find out the production value of any county, please click the blue “i” tool, then any county shown in blue. Also added is the location of the top ten wells in the state in terms of natural gas production for the six month period:

On this view, the top wells are clustered so closely together that there appear to be only four. The top two producers are both operated by Citrus Energy in Meshoppen Bourough, a small town in Wyoming County with 563 residents as of the 2010 Census, and a total surface area of 0.7 square miles. The other eight wells on the list are operated by Cabot Oil and Gas in a handful of municipalities in Susquehanna County. Here is a closer look at the wells, with an additional layer of all unconventional drilled wells:

The wells in red are the same 10 wells, all within 10 miles of one another as the crow flies. The wells in black show the other unconventional drilled wells in the area as of late August. Obviously, this part of the state has been the focus of considerable attention by the operators active in the region.