The Health & Environmental Effects of Fracking

As unconventional oil and natural gas extraction operations have expanded throughout the United States over the past decade, the harmful health and environmental effects of fracking have become increasingly apparent and are supported by a steadily growing number of scientific studies and reports. Although some uncertainties remain around the exact exposure pathways, it is clear that issues associated with fracking negatively impact public health and the surrounding environment.

Holding oil and gas companies accountable for the environmental health effects of unconventional oil and natural gas development (UOGD), or “fracking,” has been challenging in the US because current regulations do not require drilling operators to disclose exactly what chemicals are used. However, many of the chemicals used for fracking have been identified and come with serious health consequences. The primary known compounds of concern include BTEX chemicals (benzene, toluene, ethylbenzene, and xylene) and associated pollutants such as tropospheric ozone and hydrogen sulfide. BTEX chemicals are known to cause cancer in humans, and can lead to other serious health problems including damage to the nervous, respiratory, and immune system. While some of these BTEX chemicals can occur naturally in groundwater sources, spills and transport of these chemicals used during fracking can be a major source of groundwater contamination.

Exposure to pollution caused from fracking activity can lead to many negative short-term and long-lasting health effects. Reported health effects from short-term exposures to these pollutants include headaches, coughing, nausea, nose bleeds, skin and eye irritation, dizziness, and shortness of breath. Recent studies have also found an association between pregnant women living in close proximity to fracking sites and low-birth weights and heart defects. Additionally, a recent study conducted in the rural area of Eagle Ford, Texas found that pregnant women living within five kilometers (or about three miles) of fracking operations that regularly engaged in “flaring,” or the burning of excess natural gas, were 50% more likely to have a preterm birth than those without exposure. Exposure to radioactive materials is also a serious concern. During the fracking process as  high-pressured water and chemicals fracture the rock formations, naturally occurring radioactive elements like radium are also drawn out of the rocks in addition to oil and natural gas. As the oil and natural gas are extracted from the ground, the radioactive material primarily comes back as a component of brine, a byproduct of the extraction process. The brine is then hauled to treatment plants or injection wells, where it’s disposed of by being shot back into the ground. Exposure to radioactivity can lead to adverse health effects such as nausea, headaches, skin irritation, fatigue, and cancer.

With fracking also comes construction, excessive truck traffic, noise, and light pollution. This has led to a rise in mental health effects including stress, anxiety, and depression, as well as sleep disruptions.

A 2020 report published by Pennsylvania’s Attorney General contains numerous testimonials from those impacted by fracking, as well as grand jury findings on environmental crimes among shale gas operations.

How can I be exposed?

Exposure to the hazardous materials used in fracking can occur through many pathways including breathing polluted air, drinking, bathing or cooking with contaminated water, or eating food grown in contaminated soil. Especially vulnerable populations to the harmful chemicals used in fracking include young children, pregnant women, the elderly, and those with preexisting health conditions.

While it is clear that fracking adversely impacts our health, there is still some uncertainty surrounding the exact exposure pathways and the extent that fracking can be associated with certain health effects. A compendium published in 2019 reviewed over 1,500 scientific studies and reports about the risks of fracking, and revealed that 90% found evidence of harm. Although there have been various reports of suspected pediatric cancer clusters in heavily fracked regions, there are minimal longitudinal scientific studies about the correlation between fracking and cancer. The primary reason for this is because the time between the initial exposure to a cancer-causing substance and a cancer diagnosis can take decades. Because fracking in the Marcellus Shale region is a relatively new development, this is an area of research health scientists should focus on in the coming years. While we know that drilling operations use cancer-causing chemicals, more studies are needed to understand the public’s exposure to this pollution and the extent of excess morbidity connected to fracking. 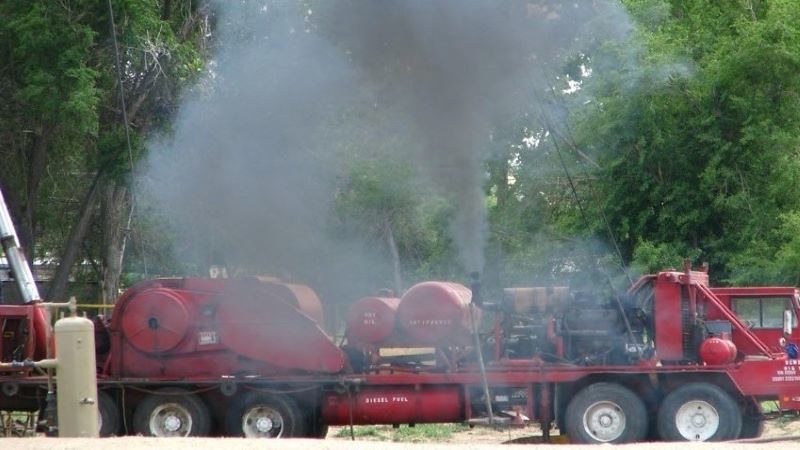 Fracking has caused detrimental impacts on local air quality, especially for those living within 3-5 miles of UOGD operations. Diesel emissions from truck traffic and heavy machinery used in the preparation, drilling, and production of natural gas release large amounts of toxins and particulate matter (PM). These small particles can infiltrate deeply into the respiratory system, elevating the risk for asthma attacks and cardiopulmonary disease. Other toxins released during UOGD operations include hydrogen sulfide (H2S), a toxic gas that may be present in oil and gas formations. Hydrogen sulfide can cause extensive damage to the central nervous system. BTEX (benzene, toluene, ethylbenzene, and xylene) chemicals and other volatile organic compounds (VOCs) are also released during fracking operations, and have been known to cause leukemia; liver damage; eye, nose and throat irritation; and headaches. While oil and gas workers use personal protective equipment (PPE) to protect themselves from these harmful toxins, residents in surrounding communities are exposed to these hazardous conditions without protection.

Regional air quality concerns from UOGD include tropospheric ozone, or ‘smog’. VOCs and other chemicals emitted from fracking can react with sunlight to form smog.  While ozone high in the atmosphere provides valuable protection from the sun’s harmful UV rays, ozone at ground level is hazardous for human health. Ozone may cause a range of respiratory effects like shortness of breath, reduced lung function, aggravated asthma and chronic respiratory disease symptoms.

Expanding beyond local and regional impacts, fracking and UOGD has global implications. With increasing emissions from truck traffic, construction, and high rates of methane leaks, fracking emissions will continue to worsen the climate change crisis. Methane is a potent greenhouse gas, with 86 times the global warming potential (GWP) of carbon dioxide (on a weight basis) over a 20 year period. Fracking wells can leak 40-60% more methane than conventional natural gas wells, and recent studies have indicated that emissions are significantly higher than previously thought.

Unhealthy air quality also presents occupational exposures to oil and gas workers through frac sand mining. Frac sand, or silica, is used to hold open the fractures in the rock formations so the oil and gas can be released during the drilling process. Silica dust is extremely small in diameter and can easily be inhaled, making its way to the lower respiratory tract. Silica is classified as a human lung carcinogen, and when inhaled may lead to shortness of breath, chest pain, respiratory failure, and lung cancer.

Many states allow this brine to be reused on roads for dust control and de-icing. Regulations vary from state to state, but many areas do not require any level of pretreatment before reuse.

Not only does fracking affect water quality, but it also depletes the quantity of available fresh water. Water use per fracking well has increased dramatically in recent years, with each well consuming over 14.3 million gallons of water on average. For more information about increasing fracking water use, click here.

A summary of other water contamination pathways can be found on page 13 of Earthworks’ Pennsylvania Oil and Gas Waste Report (2019).

In addition to air and water contamination, UOGD operations can also harm soil quality. Harmful chemicals including BTEX chemicals and heavy metals like mercury and lead have contaminated agricultural areas near fracking operations.  Exposure can occur from eating produce grown on contaminated soil, or by consuming animals that consumed contaminated feed. These contaminants can also alter the pH and nutrient availability of the soil, resulting in decreased crop production and economic losses. Children are also at high risk of exposure to contaminated soil due to their frequent hand to mouth behavior. Lastly, the practice of frac sand mining can make land reclamation nearly impossible, leaving irreparable damage to the landscape. If you think that your health or environment have been negatively impacted by fracking operations, contact: