With updated Marcellus Shale violation, production, and well data for Pennsylvania on our DataTool, it is now possible to determine which of the drilling operators are the best and worst corporate citizens.

Although it runs the risk of being overwhelming, I wanted to provide our readers with the ability to browse the full list of data that I have assembled. It is too easy to think of the natural gas industry as a homogeneous entity in terms of their impact on the environment and communities, but in reality, different drillers have different track records. It is important to have the ability to judge each company separately, and now we have means of doing so.

Each of the three assembled categories above are based on the most complete information that we have, but I should note that they are not from the same time frame. The Marcellus Shale production data is from July 1, 2009 through June 30, 2010; the violations were issued between January 1, 2007 and September 30, 2010; and the wells column contains all spudded Marcellus wells from 2006 through November 3, 2010. Since all operators are evaluated the same way, I did not feel it was necessary to limit this review to data to the small period of time when these three sets were overlapping (1). 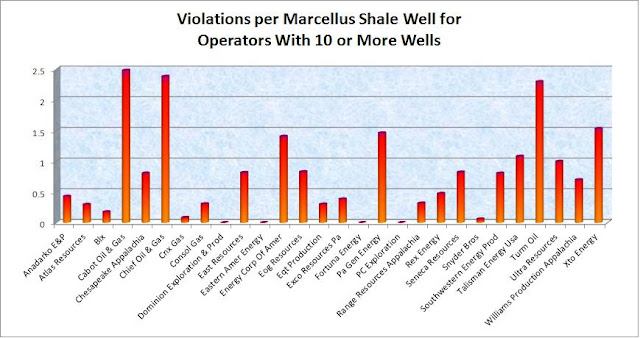 Clearly there is tremendous diversity in how many violations per well each company has. The top three offenders in this category–Cabot Oil and Gas, Chief Oil and Gas, and the somewhat ironically named Turm Oil–all have an average of over two violations per well. Referencing the chart above, Cabot and Chief have moderately high numbers of wells, and Turm has just a handful (2). Among the companies with over 200 Marcellus Shale wells, Range Resources and Atlas both have fewer than one violation per three wells, Chesapeake and East Resources both have a violation for about eight out of ten wells, and Talisman averages over a violation per well. 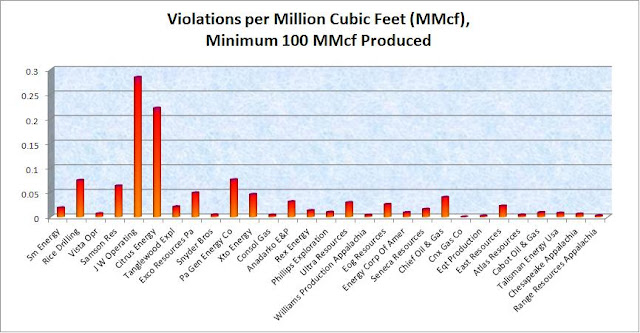 The number of violations per well is perhaps the most straightforward analysis of how seriously drilling operators treat their responsibilities to the rest of us, but it does not account for variances in the wells themselves. If you browse at the production data, clearly some of these wells are Thoroughbreds, while others are mules. One could therefore make the argument that the high producing wells are “worth” the extra violations that they might incur, because the production might equal that of several other less difficult ones. And, whether or not that is is the case, comparing violations to production instead of the number of wells acts as a sort of cost/benefit analysis of what these drilling companies have to offer Pennsylvania. 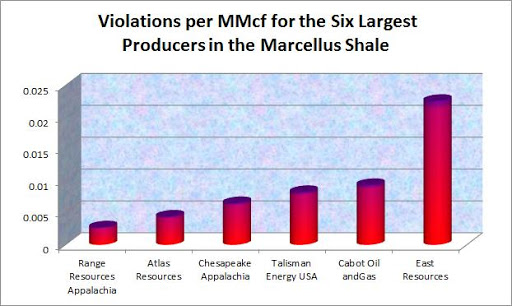 Violations per MMcf for all opoerators producing at lest 10 Bcf from the Marcellus Shale in Pennsylvania between July 1, 2009 and June 30, 2010.

Although all of these six values are well below the worst offenders (4), there is still quite a range of values, with East Resources committing over eight times as many violations per MMcf as Range Resources. While the largest drilling operators are more likely to have the resources to conduct their business properly, it is clearly more a priority for Range Resources and Atlas than for the rest of the pack.

1. There probably are some effects related to time that are reflected in the data. For example, if a well transfers hands from one operator to another, violations and production for the same well would be attributed to different operators.

2. This chart includes only those with a minimum of ten wells in order to make a more manageable display. This had the added effect of removing some of the outliers, such as Citrus Energy’s 24.5 violations per well. Some operators have violations but no wells. Perhaps they are subcontractors, but I have no information on that at this time.

3. As above, this cutoff was made for manageability of the chart display, and also trims outliers with low sample sizes.

4. Also, all but East Resources are below the statewide average of 0.01 violations per MMcf.