The Ohio River Valley Water Sanitation Commission (ORSANCO) has been testing the main stem of the Ohio River for the presence of a variety of metals for some time, with results since 1998 published at their website. Mappable versions (1) of this data from 2010 are now posted on FracTracker’s DataTool as well. Over the years, the scope of the ORSANCO sampling efforts has broadened, both in the number of sampling locations as well as sampling frequency. In recent years, there are seventeen (2) locations, from which samples are obtained every odd numbered month. Currently, the most recent data available is July 2010.
Given the rapid surge in Marcellus Shale oil and gas drilling activity within the ORSANCO drainage basin and the millions of gallons of wastewater that ultimately finds its way into the Ohio River by way of numerous treatment plants and road deicing, I wanted to see if the impact of this industrial activity was reflected in the data.

I decided to take a look at barium concentrations. According to the Environmental Protection Agency, background levels of barium are not especially high in this region (3), noting:

Barium is also a signature constituent of sorts of Marcellus Shale wastewater. According to this industry report, barium values range from 2,000 to 6,500 milligrams per liter in the wastewater.

This gives us an idea of how concentrations vary in space, at least on this occasion. Note that each of the first four testing locations downstream from the confluence of the Allegheny and Monongahela Rivers in Pittsburgh are among the highest group, with barium values in the 56.7 to 70.8 micrograms per liter (µg/L)range. These values are at once notably above the average background level and well below the EPA drinking water standard for barium of 2 milligrams per liter (4).

But what about changes over time? Marcellus Shale drilling activity has been increasing exponentially since the first well was drilled in 2006. Could this activity have any long term effects? To investigate this point, I compiled the barium amounts since 2006, and selected the three testing locations closest to Pennsylvania: New Cumberland Locks and Dam, Pike Island Locks and Dam, and Hannibal Locks and Dam. 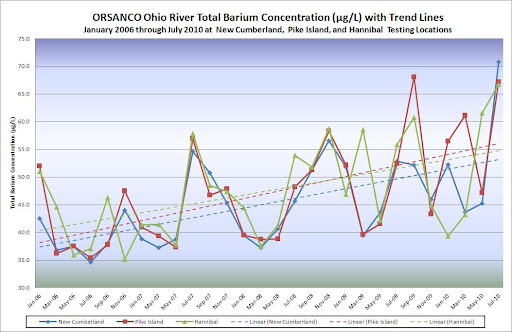 Right off the bat, we can see that there are significant seasonal variances, with peaks in late summer, and troughs in the late spring. That appears to be inversely proportional to the average flow rate of the Ohio River. 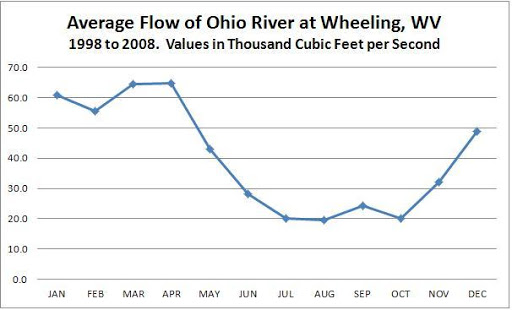 Average annual flow rate of the Ohio River at Wheeling, WV. Units are in Thousands of cubic feet per second (KCBS), and represent values between 9-1-98 and 2-29-08. Detailed flow data is available here.

Since barium values are clearly lower when there is more water in the river, it seems likely that such fluctuations would be due to dilution of pollution rather than natural circumstances.

Seasonal differences aside, the dashed trendlines of barium concentration show another story. Barium values are going up at all three locations. Significantly.

Approximate start and end values for the trendlines representing barium content in micrograms per liter at three testing locations on the Ohio River.

So while the recorded values themselves in the main stem of the northeastern portion of the Ohio River are not alarming, the fact that they are increasing so rapidly is a concern. It is worth bearing in mind that the values in some tributaries might be much higher, and that barium is only one of many pollutants associated with Marcellus Shale wastewater disposal.

Of course, none of this amounts to establishing causation between the Marcellus Shale industry and the elevated barium levels, but the circumstantial evidence is strong: barium values are very high in the wastewater, which is finding its way in large amounts into the Ohio River, where barium values are rising sharply.