All Marcellus Shale permits issued (red circles) and drilled wells (green circles). Please zoom in for a closer look in the denser portions of the map.

This does not mean that I think the 444 Marcellus Shale wells that have been spudded (time when the drill first hits the ground) so far this year is a small number. After all, today is just the 104th day of the year, which means that on average, almost 4.3 Marcellus Shale wells are started every single day. That’s a lot of industrial activity, and yet it reflects well under half of the 9.5 Marcellus Shale permits that DEP secretary Michael Krancer signs off on every day.

The longer term trends are similar: Of the 6,092 Marcellus Shale wells with active permits(1), 2,574 have been drilled. That represents about 42 percent, meaning that the 45 percent clip for 2011 is actually running a bit ahead of schedule. All of this brings a couple questions to mind:

I’m still scratching my head over the first one. I have been told that the siting and permitting processes are so involved and expensive that once the permit is in hand, the industry will drill the site, but the numbers don’t seem to reflect that as being fully true. Certainly, the 107 oil and gas drilling rigs available in Pennsylvania right now is a limiting factor in how many wells are drilled, but that doesn’t explain why the permitting process is years ahead of the drilling queue.

As for how long it takes to drill once a permit has been issued, there are means of answering that question. First, I matched the permits data to the spuds data using the wells’ unique API numbers, finding 2,804 matches for 2,574 distinct wells (2)(3). The second step was to subtract the number of days between the spud date and the permit date to determine the lag time for those permits which have been drilled, and where API numbers did match up. Let’s take a look at the results: 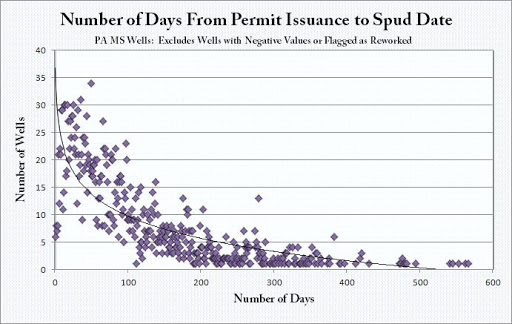 Some of the 39 wells marked as “reworked” may not have originally been Marcellus Shale wells, so they were not included in the chart above. In addition, there were two negative values, for which it would appear that well was drilled before the permit was issued. I am assuming those are attributable to clerical error, and those wells were not included in the chart above (4).

Number of days from permit issuance to spud date for Marcellus Shale wells. Please click the “i” and then a map feature for more information. Please click the gray compass rose and double carat (^) to hide those menus.

After looking at these results, I am surprised by the vast range, and beyond the number of available rigs, I can only speculate as to what factors go into determining this. It also seems remarkable that there are wells that can get the equipment in place, the site prepared, and the drill in the ground the very next day after the permit was issued. And yet, for all of that celerity, sometimes it takes well over a year to start churning dirt.