Changes Over TimeEvery time I think about the number of violations issued by the Pennsylvania Department of Environmental Protection (DEP) Bureau of Oil and Gas Management, I am struck on the one hand by the sheer magnitude of them–last year, the DEP issued 2,704 violations(1), a number that everyone would like to see go way down in the years ahead. On the other hand, at least that means the DEP is paying attention. It is with this spirit that I delved into the numbers, hoping to find patterns either in time or space. 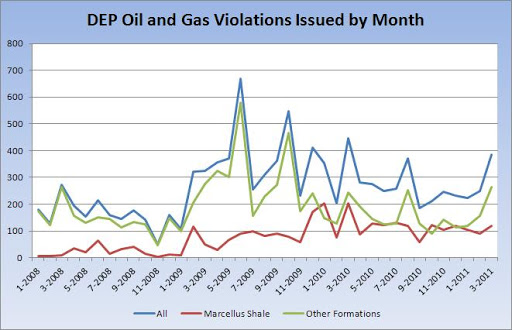 The DEP has only occasionally issued more Marcellus Shale violations per month than for other combined oil and gas formations.

The monthly issuance of violations is surprisingly erratic in a industry that is accelerating drilling activity steadily, especially for the Marcellus Shale. Once we look at the data on an annual basis, though, a clearer picture begins to emerge. 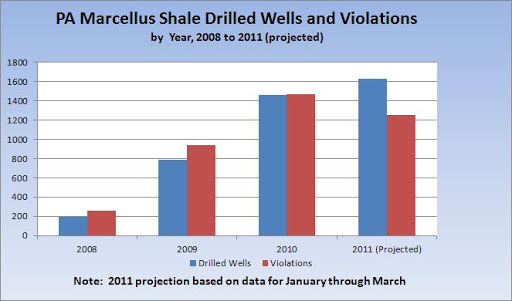 Based on a projection from the first quarter of 2011, this year will be the first year with more new Marcellus Shale wells drilled than DEP violations issued.

The number of drilled Marcellus Shale wells in Pennsylvania has been growing rapidly since the first well was drilled in 2006. Violations have been on the rise as well, but if the projections for 2010 hold true, there will actually be fewer violations this year than last year, despite the fact that there will be more Marcellus wells drilled. Again, due to the erratic nature of violations issued per month, such a projection should be taken with a grain of salt. On the other hand, it does fit with the long term trend of Marcellus Shale violations issued per wells drilled for the same calendar year. 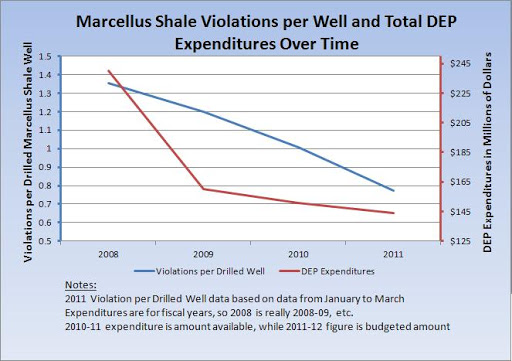 The number of Marcellus Shale violations per well has been decreasing over time, as has the budget of the Pennsylvania Department of Environmental Protection.

This graph is an attempt to look into the issue of whether the trend of decreasing violations per well might be due to DEP budget(2) issues rather than an overall increase in compliance by the industry. While this graph does not answer the question, it does lend the notion credibility.

Marcellus Shale violations per well by issuing DEP region. Click on the map for a larger, dynamic view.

The NCRO issued more than three times as many violations per Marcellus Shale well in 2010 than either of the other two regional offices. This is despite having the largest territory, and, as it turns out, the heaviest Marcellus Shale workload (3).

Number of Marcellus Shale inspections and wells drilled in 2010 by DEP Region.

Each DEP Oil and Gas Region had at least twice as many inspections as new drilled wells for the Marcellus Shale in 2010.

The NCRO issued more than twice as many enforcement actions per inspection for Marcellus Shale wells than either the SWRO or NWRO in 2010.

As a quick review of the numbers for the Marcellus Shale from 2010, the NCRO compares to the other regions by issuing more than:

The DEP briefly entertained the notion of centralizing violations and enforcement actions of Marcellus Shale wells. One wonders whether the end result would have been to reduce the vigilance of the NCRO, or whether the SWRO and NWRO would be instructed to catch up with their sibling. Indeed, either course of action could occur, even without Secretary Krancer’s direct approval of such actions.

Although the violation and enforcement numbers of the NCRO above are already convincing, there is another variability that could potentially skew the data: drilling operators. Some of the better operators in terms of violations per well such as Consol and Range Resources are active primarily in the SWRO’s jurisdiciton. Could it be that the NCRO just has more bad apples than the other two regions?

To answer this, I narrowed the list of Marcellus Shale operators from wells drilled in 2010 to those active in more than one region, the results of which are below.

There were 17 drilling operators that drilled Marcellus Shale wells in more than one DEP oil and gas region in 2010.

Even when we limit the field to the eleven operators active in the NCRO and one of the other districts, we once again see that the North Central Regional Office issued about three times as many violations per well as did the others. 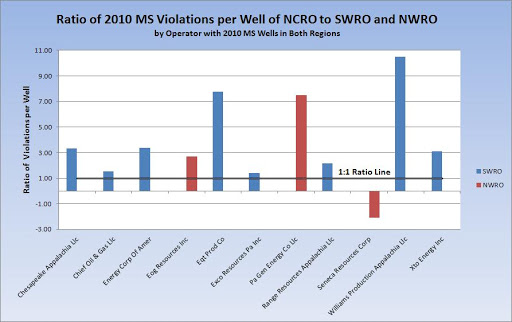 Drilling operators with at least one 2010 Marcellus Shale well in the NCRO as well as either the SWRO or NWRO. Seneca Resources is the only instance where there were fewer violations issued in the NCRO than elsewhere.

It seems difficult to imagine that the geology in the NCRO jurisdiction is really that much more challenging to work with than the rest of the state. Short of that, I cannot speculate on a reason for the consistently stark contrast in violation and enforcement patterns other than to suggest that the North Central Regional Office is run with a culture of vigilance that is unmatched by their counterparts in the Southwest and Northwest.

The goal should be for the industry to achieve a greater level of  compliance with Pennsylvania’s environmental laws, not to see a greater number of violations. At the same time, every person deserves to know that he or she is being aggressively protected from an industry that can be very dangerous and polluting. Undoubtedly, there is a lot that goes into the inspection process beyond the issuance of violations and enforcement actions, and the numbers can only go so far in providing a description of events on the ground. Nonetheless, those numbers are striking and consistent in showing a North Central Regional Office that takes a no-nonsense approach to its efforts of regulating the Marcellus Shale industry, at least as compared to either the Southwest Regional Office and Northwest Regional Office.