I was recently contacted by a resident of New York State who was concerned about Marcellus Shale gas drilling moving into his area. He found a report by geologists Dr. Gary Lash from SUNY – Fredoinia and Dr. Terry Engelder from Penn State that showed the shale layer thinning substantially as it heads north across the Pennsylvania-New York border.

What’s more, this report breaks up the Marcellus Shale into several substrata, including the Union Springs shale and the Oatka Creek shale, which are separated by a thin and intermittent layer of limestone.

On a cursory level, the thickest parts of the Union Springs substratum of the Marcellus Shale seemed to correspond with the highest production areas in Bradford and Susquehanna Counties. Even though there was another high production area in Southwestern Pennsylvania in a relatively thin portion of the Union Springs (and Marcellus Shale in general), it seemed like a reasonable hypothesis to explore. Does the thickness of the shale layer effectively predict the production values from wells in those areas?

Thickness of the Union Springs substratum of the Marcellus Shale and daily production values. As the shale layer gets thicker, it is represented by darker brown bands, while production values range from blue (lowest production) to red (highest production). For more information and a dynamic view, click the image to visit our DataTool.

Karen Edelstein, FracTracker’s New York Liason, digitized the Union Springs thickness map from the Lash-Engelder report, and then I was able to correlate the production values of all Marcellus Shale wells to the average thickness of each category. For the purpose of this exercise, only wells reporting positive (non-zero) production values between July and December 2011 were included. To account for wells in production for only part of that period, I calculated the average daily production in thousands of cubic feet (Mcf) per day. 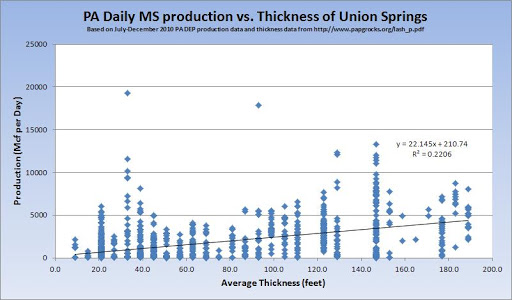 Thickness of the Union Springs substratum of the Marcellus Shale in feet versus average daily production in thousands of cubic feet (Mcf) per day.

Overall, the correlation isn’t very strong. While the trend line does show moderate increases in production as the Union Springs shale layer thickens, the low R-squared shows that there is a good bit of randomness involved. Part of this was expected, due to the large number of productive wells in Southwestern Pennsylvania, where the formation is quite thin. This would be the notable bump in the plot chart above between 20 and 60 feet of thickness.

Thickness of the Union Springs substratum of the Marcellus Shale and average daily production values. Click the image for more information and a dynamic view.

However, there is another factor that contributes to the poor correlation. As I mentioned above, the trendline does indicate that on average, wells in the thicker formations produce more gas than those in thinner formations, but there are also a large number of duds from the most robust parts of the Union Springs. That is to say, there are a lot of blue dots in the dark brown regions of the map below.

It is likely that if the whole thickness of the Marcellus Shale were considered, the results would have been even worse. In fact, some of the thickest parts of the whole Marcellus, at least according to Lash and Engelder, are in Pike County, which drillers have left alone so far.

So we have not cracked the nut of predicting which areas will yield the highest production returns, but at least we have good company in that regard. Despite the huge amount of data that the oil and gas companies possess, the results that they report to the Pennsylvania Department of Environmental Protection show that they still don’t really know what they’ll find at the bottom of a hole until they drill it.

Although there is clearly more to gas yields than thickness of the shale, it was an interesting exercise, and if the industry ever does figure it out, it will be a multi-billion dollar discovery–keep in mind that each of the thousands of wells planned cost at least $5 million to drill. Here’s hoping that they do figure it out someday, and not just because of the economics. If drilling wildcat wells can be minimized, then many of the significant adverse effects of the industry would also be mitigated as well, at least in areas where production values were estimated to be low.