As natural gas drilling in the Marcellus Shale region of our country moves forward, people in many states are debating over the best ways to regulate the natural gas industry. I’m not going to get into the impact fee discussion in this piece, although it is an obvious point of contention that needs addressed in PA immediately. Rather, I’d like to propose a way to manage the permitting and future development of the companies operating in this field.

There are 2.5 million miles of pipelines in the U.S., the majority of which are for gas transmission and distribution. A recent 4-part series by the Philadelphia Inquirer brought to light the real and potential dangers of the gas pipeline system, which is being expanded in PA to handle the Marcellus gas destined for the market. The biggest concern highlighted in these articles in my opinion is the lack of oversight anywhere in the process – especially when our regulatory officials cannot even locate the pipelines. (Specific geographic locations of pipelines are often held close to the chest due to the perception that this information poses a risk to national security and infrastructure.)

Pipelines do fail, as demonstrated by the toxic liquid spills map below. This graphic was created by the New York Times, who in a earlier article discussed the lack of human and fiscal resources available to the Pipeline and Hazardous Materials Safety Administration – noting that although the number of spills have declined, pipelines are still responsible for approximately 100 significant spills per year. 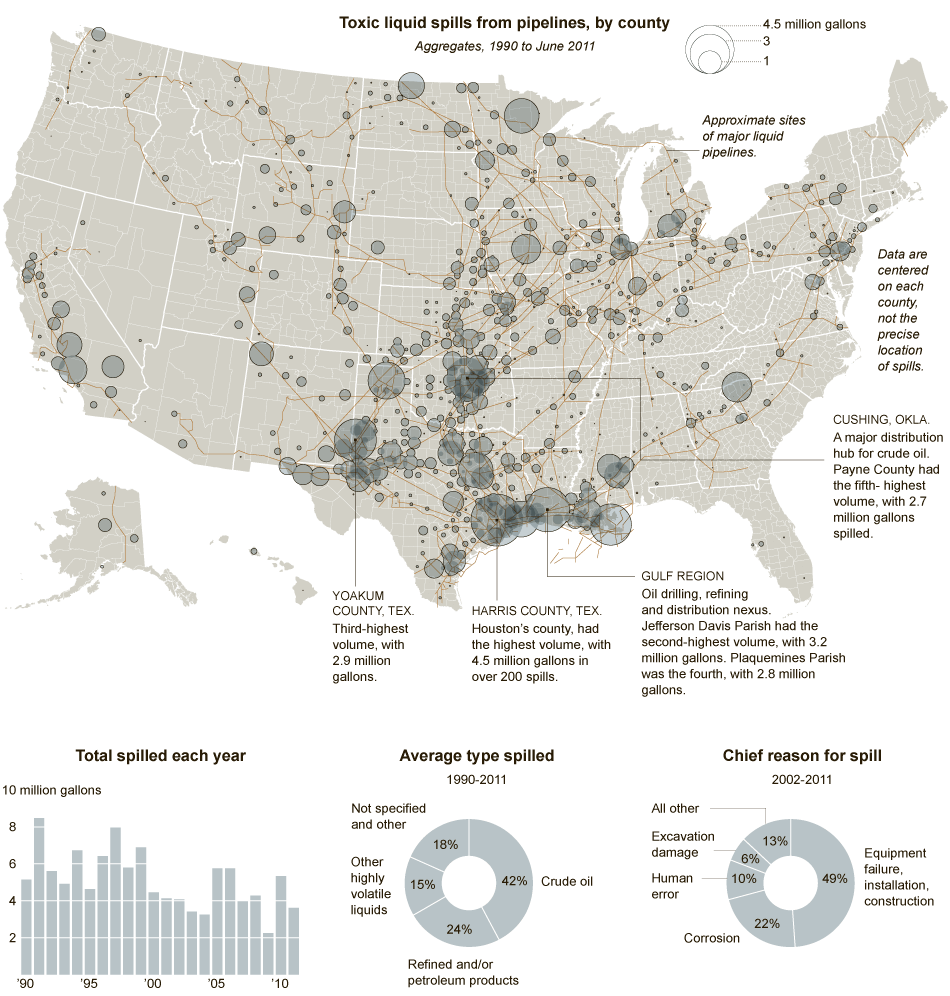 If you’d like to be able to find where pipelines are located (approximately) in your county, visit the U.S. DOT’s Pipeline and Hazardous Materials Safety Administration (PHMSA) website for Pipeline Safety Awareness. The site also provides you with data about pipeline incidents. In case you would rather not go diving through the raw data, below are some U.S. pipeline incident datasets and example maps from 2010 – Nov 2011 data that  Matt Kelso obtained from PHMSA:

(You can do a lot more with this data, such as filtering it by whether surface water remediation was necessary or by the type of contaminant that was released.)

Another concern about natural gas drilling is the risk of environmental health and safety incidents occurring throughout the rest of the drilling process.1

The map to the left created using Data.FracTracker.org shows all of the violations that were issued to drillers from Jan-Sept. 2011 in Pennsylvania. The red dots are the violations that fall under the DEP’s loose category of Environmental Health and Safety (EHS).2

As you can see, EHS incidents do occur, but is that the whole story? Perhaps we should be asking ourselves, who exactly is responsible for these incidents – pipelines and the like? When you look more closely at the data the industry’s safety record becomes less monolithic than at first glance.

Focusing on the Bad Actors

The PR surrounding natural gas drilling is controversial at best. We have seen blanket statements about how safe – and dangerous – natural gas drilling and pipelines can be. We all must recognize that the answer lies somewhere in between. However, where is the perfect medium located, and how do we address the root of the problems that do arise?

One approach that is taken by some regulatory bodies such as OSHA is to focus on the bad actors. In two of his more recent posts, FracTracker’s Matt Kelso analyzed the ‘bad actors’ that exist within the violations issued in PA. While this is certainly not an easy or straightforward task, he was able to identify operators with the highest and lowest violations per well drilled, as well as trends between 2010 and 2011. Check out these analyses here: Part 1 |  Part 2.

Bad actors are not good for the industry’s PR or the Commonwealth’s residents. If the agencies responsible for issuing drilling permits quantitatively began to take violation trends into account, this would allow the safer drillers to continue operating, while limiting those with a less than appealing track record.

1 One of the great changes made by the PA Department of Environmental Protection in the last 2 years has been the transfer from the paper record system for keeping track of the violations they issue to a digital version that allows people access to the comprehensive, raw data. This is certainly also something that should be on NY’s Department of Environmental Conservation radar prior to issuing its first permit for high volume hydraulic fracturing.