Recently, I conducted an analysis of the legacy of each Marcellus Shale operator’s violations over time, normalized by the number of wells each company has drilled, in a metric that I call Violations per Well, or VpW. While that analysis was cumulative, I’ve had FracTracker readers ask if the VpW from one year predicts the VpW for the following year, particularly among the bad actors. To help answer that question, I’ve taken the same raw data from the previous post, and recompiled it to help address that.

I’ve been looking at violations per well for some time, on the theory that it can be used to help score a company’s compliance history with regards to the Pennsylvania Department of Environmental Protection, which issues them. All of these wells and violations are Marcellus Shale specific, and come from sources posted on the DEP website.

For ease of use, I’ve color coded the results, with bright green being the best scores, and bright red being the worst. Companies without wells for a given year are indicated in pale blue. They may either indicate drilling operators that were inactive in a given year, or midstream companies that haven’t drilled any well. Here’s the color coded key:

And here are the results: 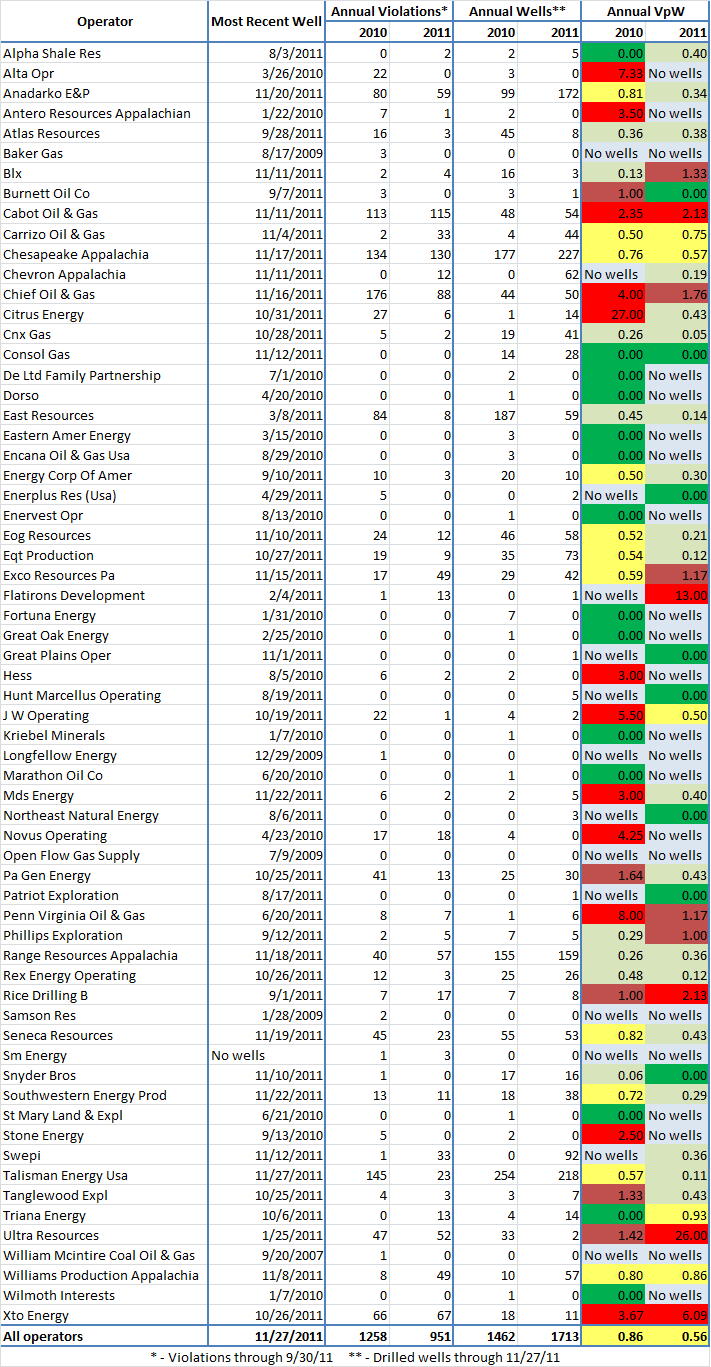 To look at the bad actors from 2010, I selected all of the entries that were colored burgundy or bright red for that year’s VpW score. How have they fared so far in 2011? 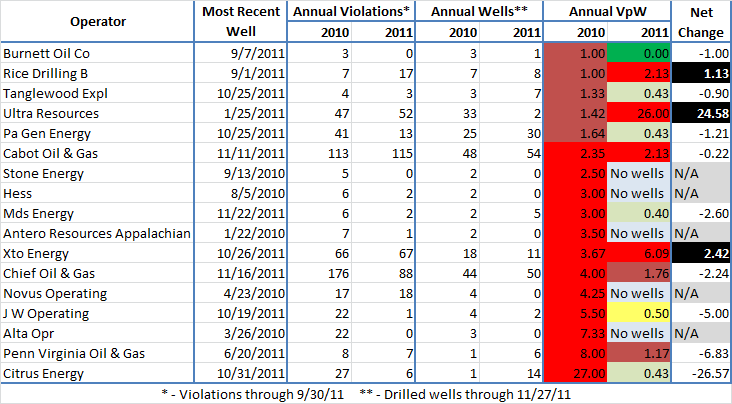 To be fair, I should point out that operators with very few wells can get obnoxious VpW scores in a hurry. On the other hand, there were 14 Marcellus Shale operators with at least one well drilled in 2010 that didn’t get any violations that year. Therefore, in this instance, I’ve included all operators with a VpW of 1.00 or greater, and will leave questions about sample size up to the reader.

Five of the operators with VpW scores of 1.00 or higher haven’t drilled any wells at all in 2011 so far. In fact, all of them had VpW scores of at least 2.50. There may be a variety of reason for their absence in 2011, but honestly, their lack of compliance isn’t missed.

Nine operators improved from 2010 to 2011, four of which improved all the way into green categories. This is the result that we want to see, where companies appear to be responsive to violations issued by the DEP. Notable among this group is Citrus Energy, which had a huge amount of violations compared to one drilled well in 2010, to a VpW score under 0.50 so far in 2011. Also, PA Gen Energy is an operator with a significant number of wells that went from a red to a green category, which is encouraging to see. Cabot, on the other hand, barely budged, and remains over 2.00 violations per well.

There are also three operators from 2010 with VpW scores of 1.00 or greater that actually got worse in 2011. And keep in mind, the data used includes almost two more months of drilled wells than violations, so inclusion in this group is especially dubious. They include Rice Drilling B, whose VpW more than duobled to 2.13; XTO, which went from awful to horrific since becoming a subsidiary of ExxonMobil; and Ultra Resources, whose performance has been nothing short of ghastly in 2011. Luckily, Ultra has been leaving the Keystone State alone since January–let’s hope it stays that way.

I maintain that since so many operators–big and small–are able to keep their violations to wells ratio at less than 1:2, all of the operators that operate in Pennsylvania’s Marcellus Shale should try to reach that standard.  Those that show a continued disregard for our laws protecting our environment should face stiff fines for their complacency, while those operators that average more than two violations per well drilled over a prolonged period of time need to be banned.