People interested in Pennsylvania’s Marcellus Shale data frequently ask me what they think is a relatively straightforward question: how many drilling permits are there for Marcellus Shale wells in Pennsylvania? As it happens, this is actually a somewhat complicated question, as there are numerous paths to finding the answer, all of which will lead to a different result. Consider, for example:

So which number is right? In my opinion, none of them. If you follow the API link above, you will see that there are serveral components to the API number, which generally is in the format AB-CDE-FGHIJ-KL-MN, where each letter is represented by a digit ranging from 0 to 9. Here’s what they mean:

So…which number is right?  My interpretation of what the code means is that to count the number of wells in any given state, you should include all of the three digit county codes and all of the five digit unique well indicators (or “CDE-FGHIJ”, as described above.)  As of January 20th, that number was 8,942 for Marcellus Shale well permits in Pennsylvania, and as of today, that number is 9,005.

Sometime this year, I expect that the number of total Marcellus Shale permits in Pennsylvania to top the 10,000 mark.  But if that claim comes within the next week or two, my opinion is that it isn’t an accurate representation of the data–even if the claim comes from the DEP itself.

The following charts contain data through the end of January 2012.  The first is based on 11,297 permit actions (or records on the permit report), while the second is classified by unique 8 digit well API numbers. 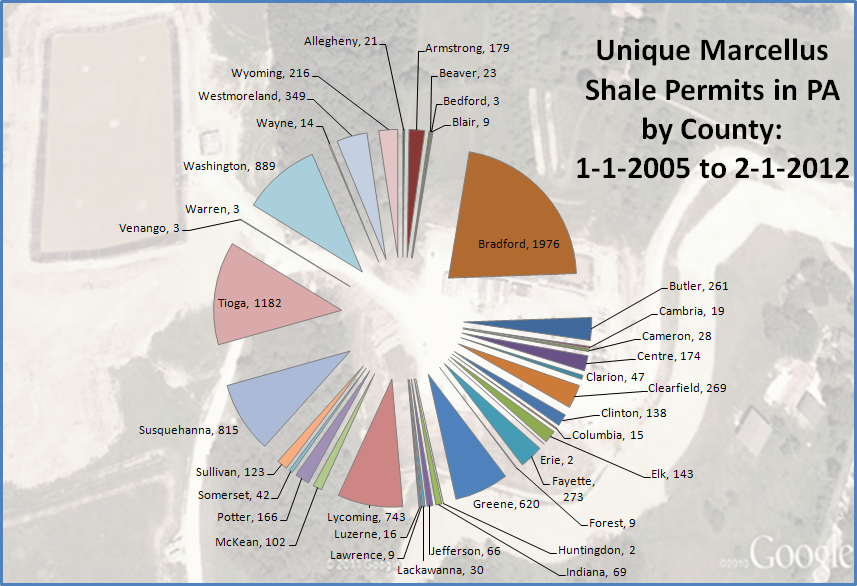