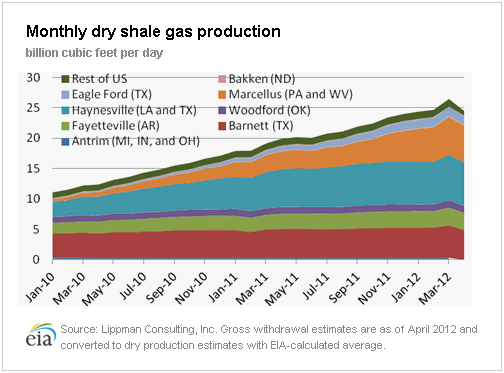 Unfortunately, the exact production values were not released along with this chart, but the Haynesville is clearly competitive with both the Barnett Shale and the Marcellus Shale, and may in fact outproduce both of them. So let’s take a look at the Haynesville, and with it, a look at the data distribution of the three states where it is located.

Haynesville Shale activity. Please click the grey compass rose and double carat (^) to hide those menus. For more information, click the blue “i” tool, then any map feature.

Arkansas has 64 wells drilled into the Haynesville formation, only a handful of which were drilled in the 21st Century. In fact, many of the wells listed are quite old, dating to the 1940’s. Taken together, the small number of wells and the age of those wells makes it clear that Arkansas is not much of a factor in the total output of the Haynesville Shale. In fact, the Haynesville wells in Louisiana stop well south of the border with the Natural State.

In terms of their data, the Arkansas Oil and Gas Commission provides access to data that many other states do not, including well stimulation data. Unfortunately, the data export feature seems to be a bit buggy, but luckily, the Haynesville data is practically unchanged from when I downloaded the data in 2010.  Much of the dataset has location information in decimal degrees–the standard latitude and longitude format of the digital age.  Many of the wells are only available in the archaic and arcane Public Land Survey System, which is still the legal way to describe locations in many western states.
Louisiana

In all likelihood, the Pelican State contains the largest share of recoverable gas from the Haynesville formation.  This assertion is based on activity rather than production:  2,400 Haynesville wells have been permitted since 2006, of which 2,194 have been spudded, and 1,985 have been completed.

The data released by Louisiana’s Department of Natural Resources has a certain elegance to it, in that the dates for permits, spuds, and original well completion can all be found on the same spreadsheet. What’s more, the same dataset contains location information in the preferred decimal degree format for the top and bottom of the wells, meaning that it is possible to map the lateral portion.
Texas

With almost 100,000 producing gas wells in 2010, Texas accounts for one fifth of all such wells in the United States. The heart of the Haynesville Shale continues into the Lone Star State from the western border of Louisiana.

And yet, there are no wells in Texas on the map above. Why? I can tell you that as of the writing of this, there are 816 Haynesville wells in Texas, according to the well search tool of the agency which oversees the oil and gas industry, the Railroad Commission of Texas (RRC). I can quickly find production values, and even the lease number, and in other queries, there are even scans of original paperwork available online, digitally, and free of charge. What they don’t provide is location data. This omission seems to be consistent with the following statement on the RRC site:

The first sentence contains the philosophy, while the second statement frankly comes across as a lame excuse in 2012, especially for a state with such substantial activity and a healthy severance tax. It seems inconsistent to dedicate so much server space to scans of images without informing you where the location is–it’s a convoluted approach to data transparency, if ever there were one.

Perhaps my interest in mapping is a source of bias, but to me, the location of the well is the single most important data point. How can you determine what the potential impact of a well would be if you don’t even know where it is?